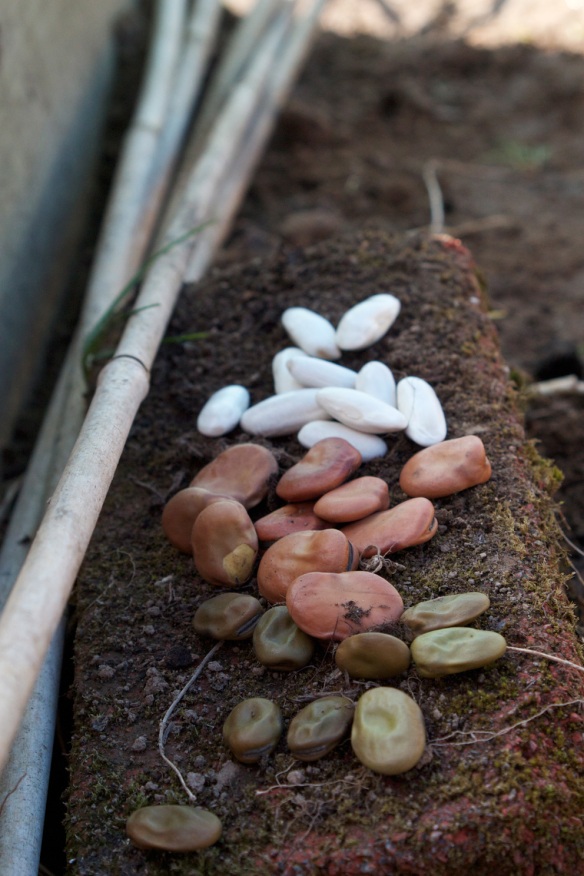 My runner beans went in the ground at the weekend, a weekend that started on Friday with me rescuing an abandoned, blue, plastic barrel from a field, then later staying with friends in Gorey where I received a gift of some precious, Asturian faba beans… thanks Mayte! And next morning, on the way home, buying another rhubarb plant at a farmer’s market, and five, not-so-small bales of barley straw at a disused brick factory.

On Saturday afternoon I dropped the straw off at the plot, covered it from the elements, and did a little bit of digging. Then on Sunday I planted two varieties of runner bean plus the fabes from Asturias (according to google, the faba bean is a member of the broad bean family, so that make it three kinds of broad bean then!). I planted two rows in a prepared bed, one row consisting of eight seeds of ‘Bunyards Exhibition’ and the second row – eight seeds of ‘Crimson Flowered’. The fabes went into two potato bags – four seeds per bag. I also sowed a few extra seeds per variety to use as transplants if required. Job done… now I’m looking forward to making Fabada in the summer!

The new rhubarb plant took its place in the rhubarb bed, and finally, I made space on the plot for my rescued water barrel.

On the way out I spotted the elusive Mr. Pheasant parading around the perimeter. I tried to sneak up on him for a closer shot but he was having none of it… one of these days!

Fabes in a bag… Fabada in the summer?

Spent a half hour at the plot this morning putting in a new bed and doing a bit of digging. When I arrived I scared off a male pheasant from a neighbouring plot and what I think were four grouse from a plot further down the hill. The grouse were happily feeding away until they saw me coming and then flew off to the cover of long grass in a nearby field. I will try to sneak up on them next time and get some photos.

I had just about finished filling the new raised bed with a mixture of manure, compost and soil when it started to rain. That’s why the pic below is so shaky – I was in a hurry to get going after yesterday’s deluge. I have two more beds to lay this week and then I can start planting my garlic and onion sets.

After…  Spot the difference?

A blast from the past…

Check out my new blog…